Barry Norman cowers in fear in a dark corner...

for he awaits the verdict that the country values.

And so we head off into my little personal indulgence with my points of view on anything from the lastest releases - for I am an avid little cinema-goer - to films that I've enjoyed in the past, to what films sound promising, and whether they live up to expectations. Expect anything from a couple of lines, to whole rants. If everything goes well with my cinema jaunts, then what you should mostly hear are recommendations. However, we start off with something not quite so promising.... 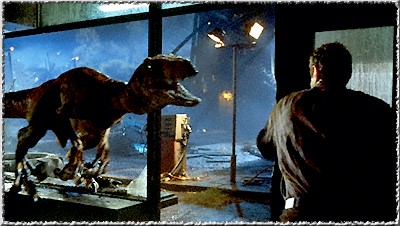 The things that I heard about this film before it's released were mixed:

Well, mixed I expected, and mixed I got.

The effects, as to be expected, were excellent - the visuals were only really slightly better than the original JP - ie: more groups of bigger dinos this time round; the impressive effects were all linked to the sound, which used the "surround" effect better than any film I've seen/heard. But then that was the highlight of the film for me. The plot and the acting were very flimsy indeed. If today's scriptwriters believe that this is a quality script, then someone should go up to them and give them a huge slap to wake them all up. Maybe then we'd get a worthwhile story to go with the visuals/aurals. ( The LW scripter should be lucky that he would only get a slap - the Batman + Robin bloke would be lined up against a wall and shot. )

Overall, a mediocre film at best, and if it had been anyone but Spielberg at the helm, the director would've gotten a LOT more criticism. This film will not en-raptor you - it's more of a TURKEY!

Now this is British cinema at it's best! I held off a while before seeing this film, because I wasn't really in the mood for a comedy, and there seemed to be other decent films to see before this one. Eventually the feelgood factor got too much, and I went today to see it.

This film has been out for three or four weeks now in Geneva, by which time,in theory, it should have been and gone. But no. There were queues this evening to get in. I was the last person allowed in, and even my front row seat ( yuck! ) couldn't spoil this film.

True, the language is a bit rough, but then that's the way that these people talk, and it's certainly not much compared to alot of films these days. Apart from that, this film can't be faulted for pure belly-laughing-to-the-soles-of-your-shoes entertainment. I was afraid that someone was going to tell me to shut up because I was laughing out loud.

This is definitely worth seeing if you like this kind of thing. Weaver is excellent all the way through as the recreated Ripley - she really does pull off the " not-quite-real " quality that is needed for this fourth installment. If you see the trailer, it looks like she is wise-cracking all the way through, but it's not so - that would be a travesty to her character, but in the film itself she's just commenting on the naivite of the characters, in her "distant " manner, highlighting the fact that she has been brought back to a time that is not her own. Winona Ryder's character nearly suffers from a lack of definition, but is saved from being one dimensional by a clever ( but seemingly thrust in as an excuse ) plot twist.

This is a great film! I've always thought that Michael Douglas is a good actor, and he's on fine form again here. I'd heard that this wasn't as good as the director's last film ( David Fincher is known for Seven and Alien 3 ), but where I thought that Seven was good at all the scary bits, I thought that it was overall trying too hard too be dark and gloomy. With this film, I have no complaints. I went in not expecting anything too special - it doesn't take a genius to figure out that if you want to put a rich man through hell, you take away his money - and that's from someone that gets so engrossed in what he's watching that he never guesses who the killer is etc etc. This film lulls you into thinking that you are watching a fairly bog standard thriller, where you'll assume you know what's happening, and then it throws you a curve ball that changes things completely. Is it a game ? Is it real ? This is done masterfully - this hasn't just got a twist at the end, but it starts twisting from the moment that the game starts and from that moment on, it doesn't let go. And don't assume that you know what is going on...


And now for something a little different.... 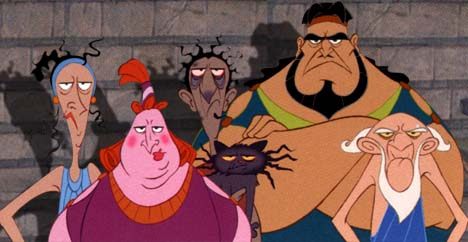 Annemasse residents say: ( Translation from the finest French ) " Sorry, my lad, it's time for a new miracle...."

Hercules is apparently done by the same people as Aladdin, and with the in-jokes and the little digs, it shows. This time there's no Robin Williams. It shows. No, it's still great Disney, even if it lacks the manic energy that only RW could bring. As ever, the drawings are impeccable, and the songs aren't bad either, with only one that comes close to syrupy ( there's always one, so nothing to worry about... ) Once again, they've made the main characters attractive, but Meg ( the love interest ) looks as if she do with a slap up meal. All that hanging out with Hades must make you loose your appetite.

As for the little digs, out go RW's impressions of Jack Nicholson and Robert DeNiro ( " Are you talking to me ?? " ), and in come digs at.... Disney itself. I won't give any of them away, but a couple are really funny. If you're a child at heart, go see it - it's Disney, you know what you're going to get, but they rarely let you down.

These are films that have caught my eye or sound interesting ( or both! ) - maybe it's just hype, but we just won't know till the thing has been released.

Jackie Brown - The new Tarantino. He's been out of the limelight for a while with rumours that the pressures of following Pulp Fiction are getting to him. Well, we'll find out soon enough ( around Christmas-time in the US at least. ) I for one have faith.

Titanic - Well, it might not pull in a profit, but the newest " World's most expensive movie " shows ( from some of the initial reviews: it recently opened the Tokyo Film Festival ) that James Cameron has pulled it off again. I'll be in the queue, and not just for the film, but for the loo too - be warned, the film clocks in at 3 hours 14 mins! 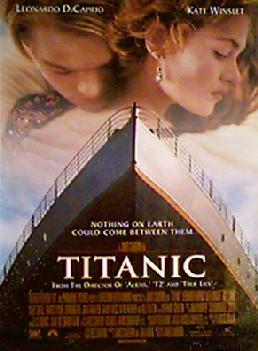 The Postman- Kevin Costner seems to have lost his head of steam a little recently, but I suppose that a divorce and being the brunt of bad criticism for a hugely expensive film can do that to you. Not that I would know about either. Still, I have high hopes for his new one, out at the end of December. He's got his Director's cap on this time round, too - and that seemed to work out just fine the last time. And it's got a good poster. What else could you want?? 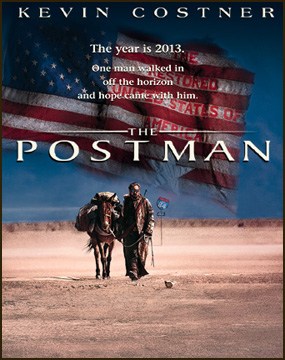